A lot of the time, when I cook vegan, I simply substitute a vegan alternative for an animal product in a recipe. There are so many substitutes out there. I’ll include a list of my favorites in another post.

Of course, there are also “vegan” recipes out there – yes, really – and my mom gave me this cookbook for Christmas, which I’m using as proof to show you: 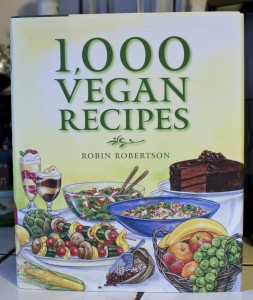 Now, my mom’s most certainly not vegan, nope, not vegetarian either. And she admitted that she only found this cookbook for me after scrounging around on a table in a bookstore. Though I’m pretty sure there’s other vegans out there…..hello…are you out there??

All that aside, this is an AMAZING Cookbook!!

I offered to bring a dessert to our friend’s house last night for dinner, so I chose the vanilla cupcake recipe.

Since I hadn’t tried this recipe before this, I didn’t want to taste the cupcakes before going to our friends because I didn’t want to stress about them if they weren’t good, and there simply wasn’t time to make anything else. Probably not a smart idea since the cupcakes could taste like shoe leather, but as luck would have it…. 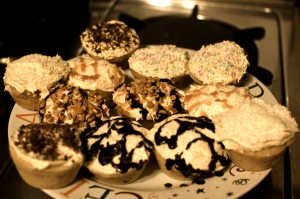 they were fabulous!!! (unlike the colors of my photograph – not sure what happened there – so you’ll have to trust me on that one)

Our friends (who are known to be big dessert people) seemed to really be impressed and loved them – even after I confessed they were vegan.

And I think I can trust that they loved them – as I came home with an empty plate.